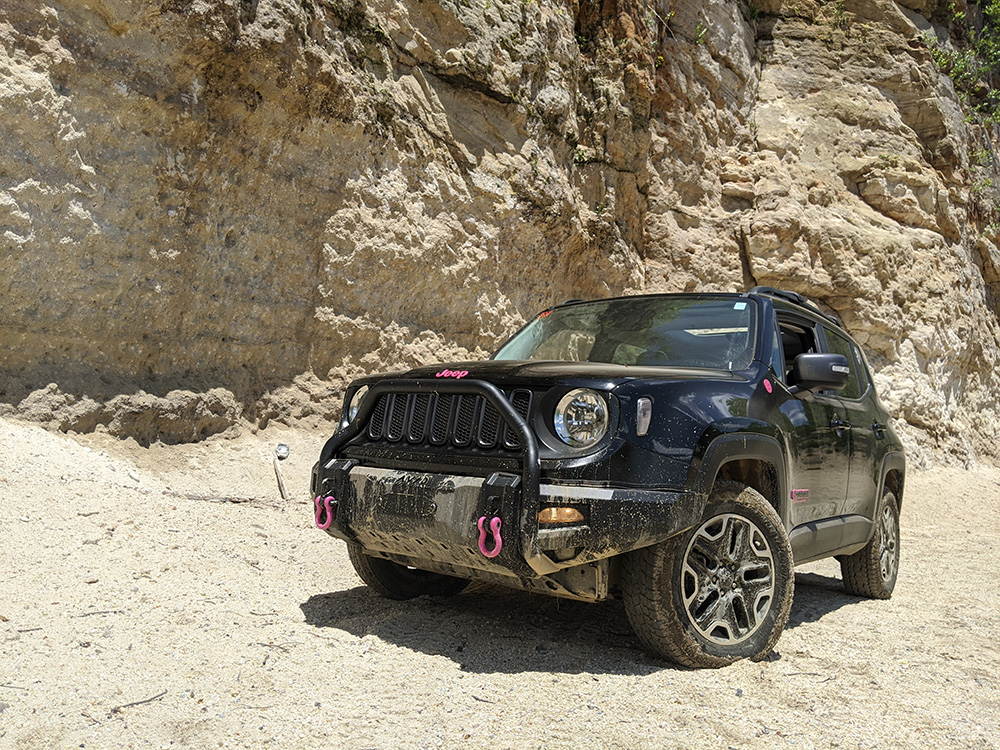 Owning a Jeep sounded like a nice idea.  I knew about the “Jeep wave” and it seemed, from the outside, like the Jeep community was full of wonderful people who all got along and enjoyed their vehicles and didn’t squabble all that much.  Kind of like the Volkswagen community, I thought, except with more reliable vehicles.

(Also, I thought Jeeps were reliable. My mistake, again.)

You see, I didn’t buy a “real” Jeep.  Naively, I assumed that having “Jeep” written across the front of the vehicle meant it was a Jeep.  No.  The only “real” Jeep is the Wrangler, but really it’s only the two-door Wrangler, because the four-door Wrangler is a mall crawler, except I guess we might also wave to Gladiators now?

I joined some Jeep groups on Facebook.  I started an Instagram.  And then I learnt that the Renegade was Jeep’s red-headed stepchild, and definitely not invited to the family reunion.

Before my 30-day temp tags were up, I took it to the local off-road park and scratched up the side of my five-figure loan to see if the Renegade was a real Jeep.  The month after that, I did it again, just to make sure.  Turns out, a Jeep Renegade will actually drive over some rocks, through some mud, up a sand dune, etc, etc.  It’s not a rock crawler, for sure — but for it’s size, it’s surprisingly capable.  I started taking some serious looks at other Instagram accounts and found that people were swapping bumpers and lifting the Renegade for better off-road performance…

Step one, I bought a set of all-terrain tires, slightly larger than stock size, and had them mounted.  Back to the off-road park.  Much better.

Step two (to my complete surprise), Avid, the only company that makes aftermarket bumpers for the Renegade, reached out to me on Instagram.  One sponsorship deal later, the Avid Radius Wyoming-Edition bumper arrived at my house.  It was the middle of winter, so the bumper didn’t actually make it onto the Jeep until spring, but once it was on, back to the off-road park we went.  The dip on the upper rim of the quarry where I would scrape the plastic fascia of the stock bumper was no longer a problem thanks to my Jeep’s new approach angle, which is great. There’s a winch mount hidden on the inside of the bumper for when I get around to that, too.

Step three, procure some aftermarket skid plates from Valkyrie Offroad, and finally get a plate on the rear diff (the only thing on the Renegade that doesn’t come with armor).  I drove down to Vinton County, OH to meet up with some folks from the internet and follow a bunch of Cherokee Trailhawks through the woods.  I scraped those skid plates all over creation, but the Renegade performed admirably on big scary obstacles. Later, I’d slide it at an angle off a tiny rock ledge and bash the passenger-side fender, impressing no one.  Oops.

Step four, do a bunch of research and end up buying a 1.5″ Teraflex lift kit. Dither around trying to decide if I want to swap in Eibach Pro lift springs when putting on the lift. Dither around wondering if you should buy the .5″ leveling pucks for the front now, or later (how much is that bumper really making the front suspension squat, anyway?). Dither around because lift installation is expensive, and you put up with enough expletives having your boyfriend help install you bumper.

Dither around so much that it becomes November, and you still haven’t had your fender bent back into shape. Decide to leave the whole mess (except the fender!) until next spring.

Dither around further, and have it be April of 2021, and still have your Jeep sit at stock height with bent fender. #killingit

My next steps also include installing a pair of ditch lights (2″ LED cube pods), and RGB LED rock lights (because what’s the point if they’re not pink?).

I’ve had the Jeeplet (as I affectionally call her) for a little over a year now, and even though I’m not driving as much now that I work from home, I’m still enjoying it. Hopefully we’ll get the chance to do a little more off-roading and overlanding in 2021 (a lot of events got cancelled for 2020) and I can push her limits a little bit more!