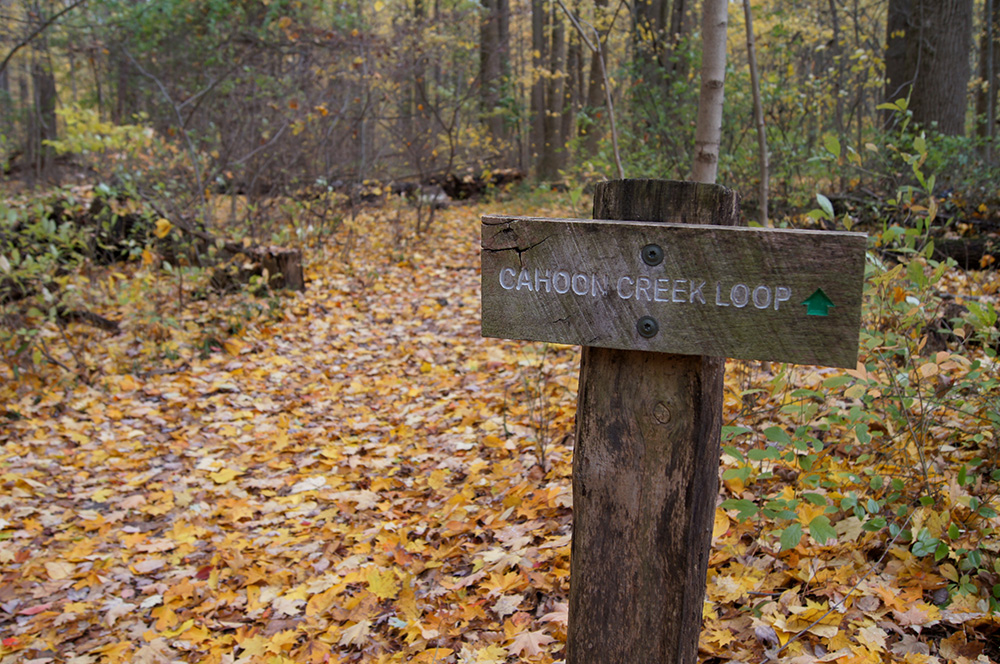 Bradley Woods is a 795-acre swamp forest hidden away on the border of Westlake, OH and North Olmsted, OH. Like a lot of places in northeast Ohio, it’s also the site of an old sandstone quarry (you can’t throw a rock without hitting an old sandstone quarry here–and any rock you find to throw will probably also be sandstone). It’s located about twenty minutes from my house, and although I knew that Bradley Woods existed, I’d never gone to visit.

The park contains a small lake, Bunns Lake, where, as the website puts it, “ducks and geese are plentiful and the occasional blue heron has been known to visit as well”.

I’m glad that I hadn’t read the website description all that throughly before visiting, because it would have made finding the heron less special. Of course, I also didn’t take my zoom lens, so my photos of said heron are just a little less than stellar…

Seeing the heron (really close to the trail!) was a special moment to share with my son, who I don’t think has ever got to have a good look at one before. We’ve occasionally seen them flying overhead through the park system, but I can’t recall him having seen one up close.

After walking the paved loop around Bunns Lake, we headed to the Cahoon Creek Loop trail, which says it’s .6 miles. I’m not sure it was actually .6 miles; it felt a little longer. We’ll have to go back and hike it again with GPS turned on.

Even though Bradley Woods is a small park and close to civilization, it felt like we were way out in the woods. There was no traffic noise and no evidence of people nearby.

I’m not sure what this is. It’s obviously some sort of water pump thing, but why is it in the middle of the woods? Is it a leftover from a sandstone quarry? I have no idea how old it might be. It’s located next to the trail about halfway through, and there were no other man-made objects in sight.

The sky had started darkening up when we were about halfway through the trail, and maybe 3/4 of the way through it opened up to deliver this graupel. If you’re unfamiliar with graupel, it’s not quite snow, and not quite hail. Technically, it’s soft ice that has formed from very cold water droplets freezing onto snowflakes as they fall; it doesn’t get much bigger than this and isn’t as unpleasant as hail when it falls on you… although getting pelted with it still doesn’t feel great. We hightailed it to the end of the trail and made it back to the Jeep before it started raining for real.

On the “to-do” list: going back to hike the other two forest trails at Bradley Woods. If you want to check it out, download the trail map from the Cleveland Metroparks website ahead of time; we had trouble locating the trailheads (which is how we ended up on the short Cahoon Creek loop when we were looking for the Quarry Trail) and didn’t find a map kiosk in the parking lot (unusual).