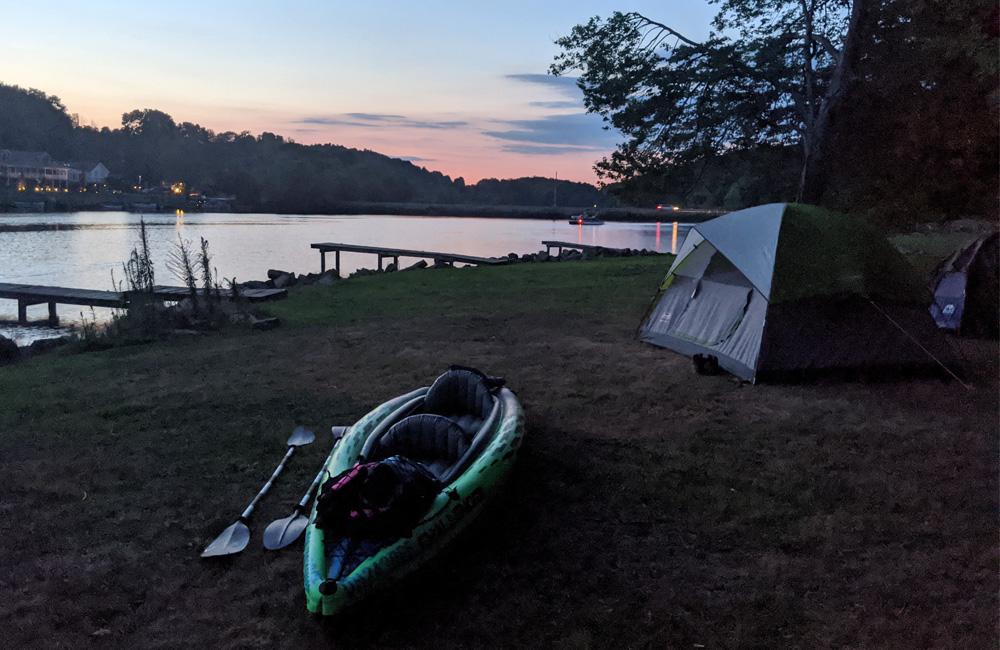 This is the second year we’ve gone to Guilford Lake State Park before the start of school.  It’s a small, family-friendly campground operated by the Ohio Department of Natural Resources in Columbiana County, Ohio.  Most of the traffic is travel trailer/motorhome campers and kayakers, but there are a few sites that are great if you’re like us and prefer a tent and/or hammock.

Guilford Lake is a manmade lake originally constructed as a canal feed reservoir in the 1800s; it is wholly contained inside the state park, which encloses the lake, the campground, and little else.  Boats on the lake are limited to 10mph, making it popular with paddlers and pontoon boaters.  You’ll see plenty of pontoon boats out on the lake when you visit, as the houses along the lake usually have at least one docked on their property and a local restaurant/marina, Mark’s Landing, rents out the boats as well.

There are 42 campsites at Guilford Lake State Park, most of which have an electric hookup.  There’s also a playground, swimming area, boat launch, and a shower house with flush toilets.  Bags of ice and bundles of firewood are available for purchase from the camp office or from the camp hosts.  Each site has at least one picnic table and fire ring; some sites have boat docks (which are available to rent for $8 a night, paid at the camp office/camp host).

You can make a reservation at GLSF by visiting the ODNR Camp Ohio website. I recommend pulling up the state park in Google Maps and zooming into the campground on satellite view when making a reservation to get a feel for where your campsite is. We chose campsite #10 for our first visit, but it’s better suited to someone in a motorhome or camper who will be out on the water for most of the day, as it is immediately next to the camp hosts and shower house in a high-traffic area. The camp also has a small outdoor movie theatre behind it’s welcome sign; if you’re at campsite #10, you can watch and hear the movie clearly from your site. Great for kids, not so much for adults who were hoping for quiet!

For our trip this year, we chose campsite #17, which is perfect for tenting. It’s a very large site that wraps around the back side of the playground; you’ll have a lot of kids come to visit you, but if you’re camping with a kid or two already, that’s perfect! The site is also right on the water, which means waking up to a lake view in the morning… in my opinion, there’s no better way to start your day. A nearby boat dock provided a perfect place for us to launch and take out our kayak.

The lake itself is over 300 acres of water; you could easily spend most of a day paddling about and getting sunburnt. Because boats are limited to 10mph, a passing pontoon boat will only result in a paddler bobbing gently in the wake for a minute or two. We took our two-person inflatable kayak out on the lake a few times during our stay and had a blast paddling around.

Campsite #17 actually has two fire rings; we decided to use the one that located right on the lake instead of the one further up by the parking pad. Nighttime campfires were even better than usual thanks to being right on the lake; we enjoyed a nice breeze coming off the water and were treated to music and colorful lights from passing boats until the boaters decided it was time to dock up. The second night we stayed, a decently powerful storm rolled through about 10pm that caused us to drop our canopy to half-height with most of our gear underneath it and tough it out in the Jeeps for an hour or so, but the third night we were treated to clear skies and a dazzling array of stars. Even though there is some light pollution from the houses on the lake, GLSF is far enough out in the “middle of nowhere” that the stargazing is decent.

Will we return to Guilford Lake State Park next year? Most likely. My son has a blast making friends with other kids at the campground and playing on the playground all day (when he’s not busy attempting to catch a fish from one of the boat docks), and Dave and I get to enjoy some downtime reading books, kayaking, and napping in the hammocks. It’s a fun family getaway that’s less than two hours from home, but feels like farther away.