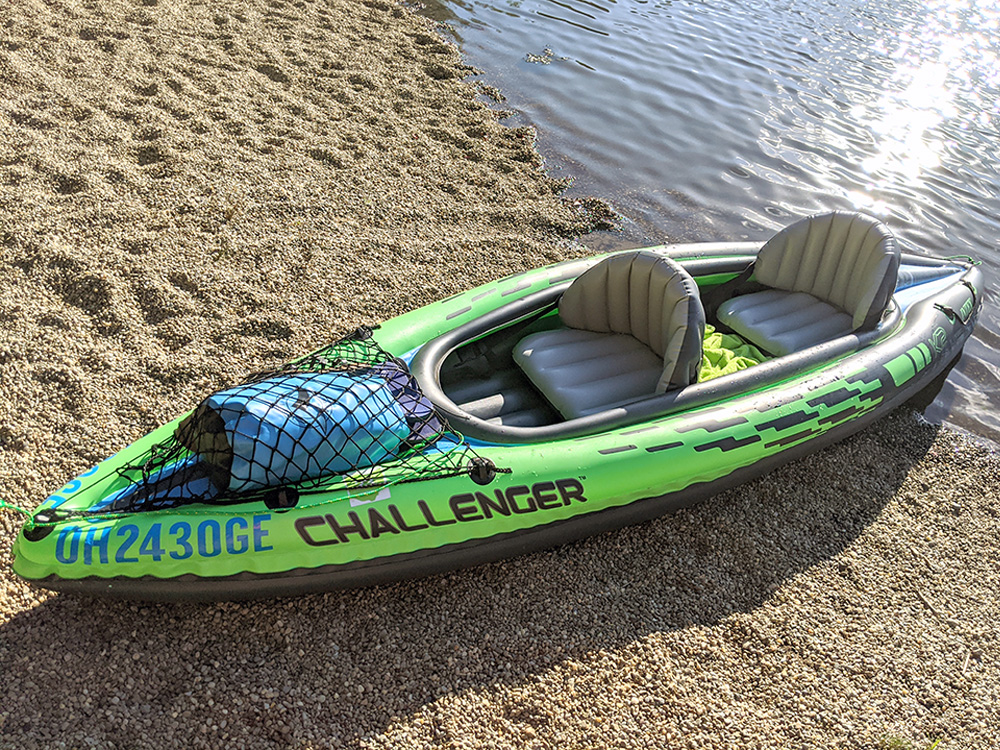 For a long time, I have wanted two things: an inflatable boat, and a kayak. Imagine my delight when I discovered I could have both in one package.

That’s not sarcasm–I really have wanted an inflatable boat and a kayak for a long time. I have no idea what stopped me from purchasing an inflatable rowboat in the past, really, except I think they used to be slightly more expense than they seem to be now. Decent entry-level kayaks run a couple hundred dollars, though, and then you have to figure out how to store and transport them. That was one of the things that kept me from purchasing a kayak.

The other thing that kept me from purchasing boats is that my boyfriend, Dave, doesn’t really like the water. Where I’m drawn to it like some kind of sea bird (I like being on it, love being next to it, but only occasionally like to be totally in it), he’ll avoid getting wet at all costs. He’s just not a Water Person, which is sad because one of my ultimate life goals would be retiring to #LakeLife–my parents took me to Sebago, ME when I was 17, and years later I’ve still got the sailboats on Sebago Lake burnt into my retinas. Dave, however, could probably be happy if he never had to ever look at another lake, ever.

Luckily, my son loves the water as much as I do, so I do have someone to enjoy a good lake with. However, putting a nine-year-old in their own kayak is probably not a Great Parenting Move, and buying a tandem kayak just to use with my kid is a little cost-prohibitive.

At a cost of around $130, the K2 inflatable kayak comes with the hull, two seats, a nose cone, a skeg, two collapsible paddles, and a high-output hand air pump, all in a handy carrying bag. The bag is about the size of a storage bag for a large comforter (but will be much heavier when everything is packed up–just under 40 pounds).

It sounds very promising–just dump the bag, unroll the hull, use the air pump to inflate the boat, seats, and nose cone, and do some light assembling. Within ten minutes or so, you should have a functional boat. But how well does it really work?

My son and I have taken the K2 out on three lakes now, and I have some thoughts.

First, about inflating and assembling the boat: it’s not hard, but it’s an annoying process. Every time I’ve set this boat up, I’ve caught myself thinking about how I could have spent a cool thousand dollars on a real tandem kayak setup (the boat, paddles, j-hooks for the Jeep, etc) and I’d never have to inflate the K2 again. It’s a fleeting thought, but it’s there.

The high-output hand pump included with the boat is kind of small, so you end up holding it to ground with one foot and getting quite an arm workout while killing your lower back, plus it takes some time to inflate the shell. (This could be solved by purchasing a larger pump, but I’m a) lazy, b) cheap.) The kayak itself has two air chambers with Boston valves that make it fairly easy to inflate and deflate the boat (more on deflation later). There are two lines on the hull that should measure 10cm when the air chambers are properly inflated; this is more useful than giving an instruction like “inflate to x psi” because there’s no way to measure psi. A plastic strip that measures 10cm is included with the boat so you can measure the hull pressure. Another bonus: nozzles included with the air pump can be used to inflate the seats and nose cone, so you can save your breath.

Good news, though: the K2 is pretty easy to set up once you’ve got everything inflated. The seats attach with velcro to the bottom of the boat, and the backs have a nylon strap that buckles into the either side of the hull to keep them upright. The plastic skeg clicks into a holder on the bottom of the hull, and the nose cone slips into the bow of the boat for added stability and use as a footrest for the front passenger. The collapsible paddles click together quickly.

From start to finish, inflation and assembly should only take about ten minutes.

True story: I’ve never been in a real kayak, so I don’t even know what I’m missing. If you’re looking for a traditional kayak experience, I’ve been lead to believe that the K2 is not it… but it’s still pretty decent.

The K2 tracks pretty straight, thanks to the skeg. If you forget the skeg, you’re going to be all over the place in the water. The K2 is also fairly narrow, so you’ll be able to get up to a decent sped pretty quickly — I was actually surprised at how fast my son and I were able to get going on a calm lake. Finally, the K2 seems pretty stable in the water. When we were out on Guilford Lake, the wake from the passing pontoon boats (going about 10mph) caused us to bob around a lot, but it never felt like we were going to tip.

I’m actually looking for suggestions for better paddles, because while my son doesn’t have any problem with the paddles included with the K2, I think I need something slightly longer. I end up dripping a lot of water into the kayak with the included paddle — eventually I got smart and lined the back of the kayak with a towel so that I didn’t have to try and dry the boat out by hand every time we went paddling (more on that later).

My least favorite thing about the K2 (and its sibling, the K1, which I also own) is deflating the boat. Maybe it’s just the size of my hands, but I find it really hard to get my fingers into the port and grip the outer cap of the Boston valves. This resulted in a lot of anxiety and profanity, until I wised up and began using the pliers on one of my multi-tools to open the valve — so it’s fine now, but I need to make sure I have a tool in order to deflate the boat, which is annoying.

The other thing is that the boat takes forever to deflate. We’re talking “walk away for an hour or two” levels of ‘forever’. While most of the air will leave the hull in 5-10 minutes, rolling it up and getting it back in the bag is an exercise in futility because you’ll trap air in the chambers while rolling it up. You have to fold the hull in half before rolling it up, which will effectively prevent air from reaching the valves (and you don’t want to pop the hull, obviously, so you can’t force it). I often end up shoving the hull in the back of my Jeep, bringing it home, and leaving it out on the lawn for a couple hours before rolling it up and putting it away.

As I mentioned above, I’m looking for a longer paddle to take with me when I use the K2. I end up dripping a lot of water into the boat, which is annoying because the K2 is solid-bottomed and doesn’t have a drain plug. This makes some sense, because it’s an inflatable boat, but it’s still annoying. The i-beam construction on the bottom of the hull makes the boat pretty solid, but it’s a PITA when you have to shove a towel down in the crevices to get all the water out before putting it away — and any water that makes it into the boat will run down those channels into the bow and stern, where it will pool (especially in the stern).

I also wish there was a second cargo net on the stern of the boat. The one on the bow is very useful, but I wish there was a second one where I could put the carry bag, air pump, etc… things that I might need far from where I started, but that I won’t need while I’m actually on the water. I also don’t always wear a life jacket (I know, I know — but we only paddle on calm lakes where I know I can swim to shore) but the state of Ohio requires me to have one on board for each passenger, and clipping it the ropes on the stern only helps get it wet for no reason (my son is legally and mom-ily required to wear his vest at all times).

Another small annoyance is that if you live in a state that makes you register an inflatable boat (ahem, Ohio), the HIN (Hull Identification Number) is very, very hard to find. It is printed in medium gray on the dark gray part of the hull, which is a ridiculous design choice by Intex. I’m here to tell you that the K2 does have a HIN, and it is located on the starboard side of the boat, on the top of the hull, about two inches away from the green ring around the tie-down point at the stern. For the best chance of finding it on the first try, bring a flashlight and shine it an angle until you see the text.

A pet peeve that shouldn’t concern anyone who doesn’t need registration decals: the voidable state registration decals Ohio issues don’t stick particularly well to the vinyl material of the hull, and folding/rolling up the boat means a lot of wear and tear on decals and registration numbers in general. I am probably going to end up painting my numbers on the hull because my vinyl numbers are coming off, and I placed my registration decals above the “Challenger” name on the sides of the hull (which is technically a little higher than I should have put them) to try and prevent them from peeling off the void backing when I roll up the boat.

Yeah, I know I just posted a lot of words detailing every annoyance I have with K2, but here’s the thing: they’re annoyances. In the long run, they don’t really take much away from my enjoyment of the boat. I love that I can toss the carry bag in the back of my Jeep, drive to a lake, and enjoy an afternoon of paddling about with my son; I love that I didn’t have to figure out how to store a tandem kayak in my garage or my shed; I love that it didn’t cost a lot of money.

For our needs, the K2 is perfect. It didn’t cost a lot of money, came with everything we needed to get started paddling (besides life jackets and boat registration), and is ultra-portable. I’m not expecting it to last forever, but it’s great for right now. I purchased it for just over $100, and it’s easily provided that much entertainment in just one summer. Eventually, my son and I will probably move into our own ‘real’ kayaks, but for now we’re out of the water making memories with our inflatable, and it’s worth every penny.

For more specs, visit the Challenger K2 product page on the Intex website or shop for the K2 on Amazon.

As an Amazon Associate I earn from qualifying purchases, and receive commission payments for purchases made through Amazon links in this post.